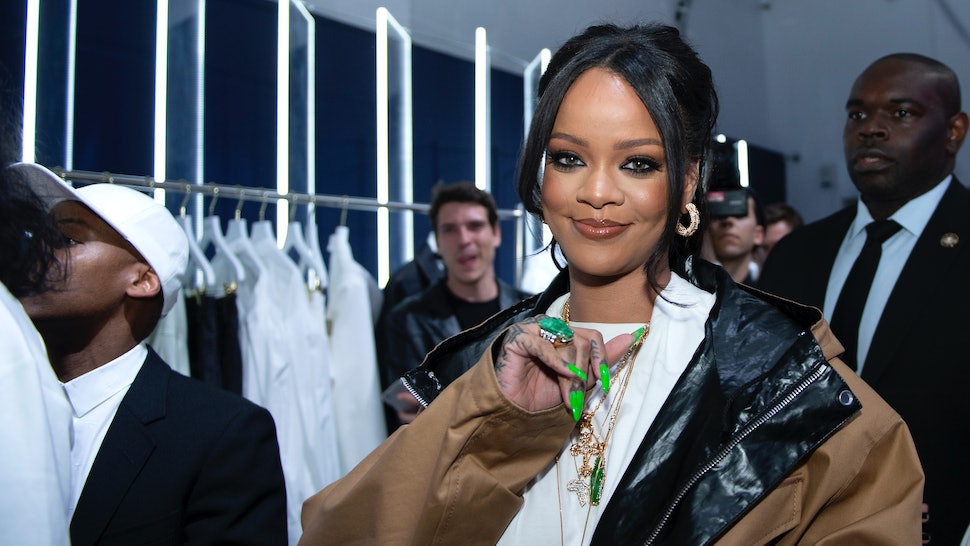 Any time Rihanna makes an appearance at an award show, she gives a style show all of her own. Known as one of the definitive queens of celebrity fashion, Rihanna’s 2019 BET Awards outfit certainly continues the legacy of fabulous award show style. Look out, cause RiRi came to work, work, work, work, work.

The Fenty creator was at the BET Awards to honor Mary J. Blige and present the iconic singer with a Lifetime Achievement Award. To present the honor to Blige, Rihanna wore a sleek black leather look with a big belted coat and tight leather pants. Though Rih hasn’t been confirmed as the designer of the look at press time, the outfit has the same silhouette and cut as many of Rihanna’s Fenty looks from her new luxury fashion label with LVMH. And you can best believe it only makes sense that Rihanna would wear herself to her first major red carpet in months and months and months. 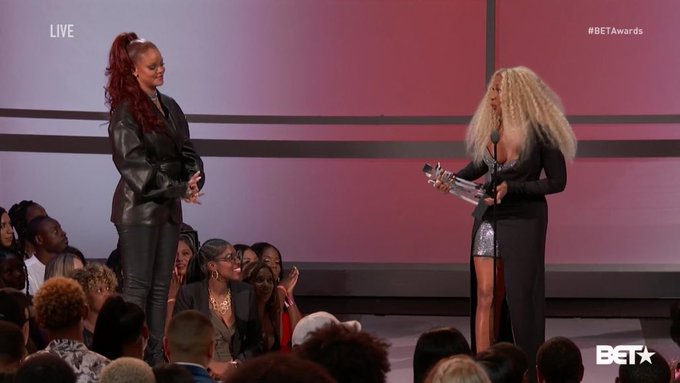 Celebrity stylist Yusef, who often works with the star, created her ‘do that is big and full of secrets. Rihanna’s hair is back to red that’s reminiscent of her early days, which we saw with her box braids earlier this week. Yet, for BET, Rihanna ditched the protective style for different look. A sleek half up, half down look with a good amount of curly volume was more Rihanna’s speed for Black entertainment’s biggest night.

Rihanna’s makeup for the BET Awards was simple — but you can bet it was Fenty. With a fierce cat eyeliner and a smoky shadow, Rihanna’s makeup kept the drama on her eyes. The makeup maven wore a neutral lip to provide some balance to the sultry eye. Rihanna is known for testing new Fenty Beauty products at award shows, so take your best guess at what unreleased makeup may be hiding on her face.

Rihanna isn’t nominated for any BET Awards this year (“No More Music”, after all), but she did show up for Mary’s big moment. Because who would say “no” when Mary J. Blige is ringing? That being said, her appearance comes as quite a surprise. After all, the last time Rihanna attended the BET Awards was back in 2015 when she teased an exclusive clip of the “Bitch Better Have My Money” music video. She has, however, been nominated or at least one BET Award every year since 2008 (except for this year because “No More Music”), which is quite a feat.

When Rihanna takes the time out of her busy Fenty-filled schedule to turn up at an award show, you know it’s truly a special occasion. Her appearance — and look — at the BET Awards is just further proof that this really is Black entertainment’s biggest night.

4 Of The Latest Fashions From Celebrities