The long-awaited draft National Education Policy (NEP) 2019 is finally out. Four years in the making, this comprehensive document of 484 pages contains some excellent individual recommendations on school education, including far reaching reform of teacher training and of the school exam system; the establishment of a national education commission; and the separation of roles in the governance of education instead of government being policy maker, operator, assessor and regulator of schools, which leads to deep conflicts of interest between its operator and assessor roles, and whereby it cannot hold public schools accountable since it is operating them itself.

Second, it misdiagnoses the causes behind the severe learning crisis, failing to recognise the elephant in the room – namely poor school and teacher accountability, with no mention of the chronic teacher absenteeism and low teacher effort as key problems. Thus inevitably there is no big-ticket fundamental reform proposed for revamping the accountability structures for schools. Instead, the NEP provides that school management committees (SMCs) – institutions without any powers – shall hold schools and teachers accountable. This is a rather romantic notion, given that SMCs already mandated under the RTE Act were ineffectual. 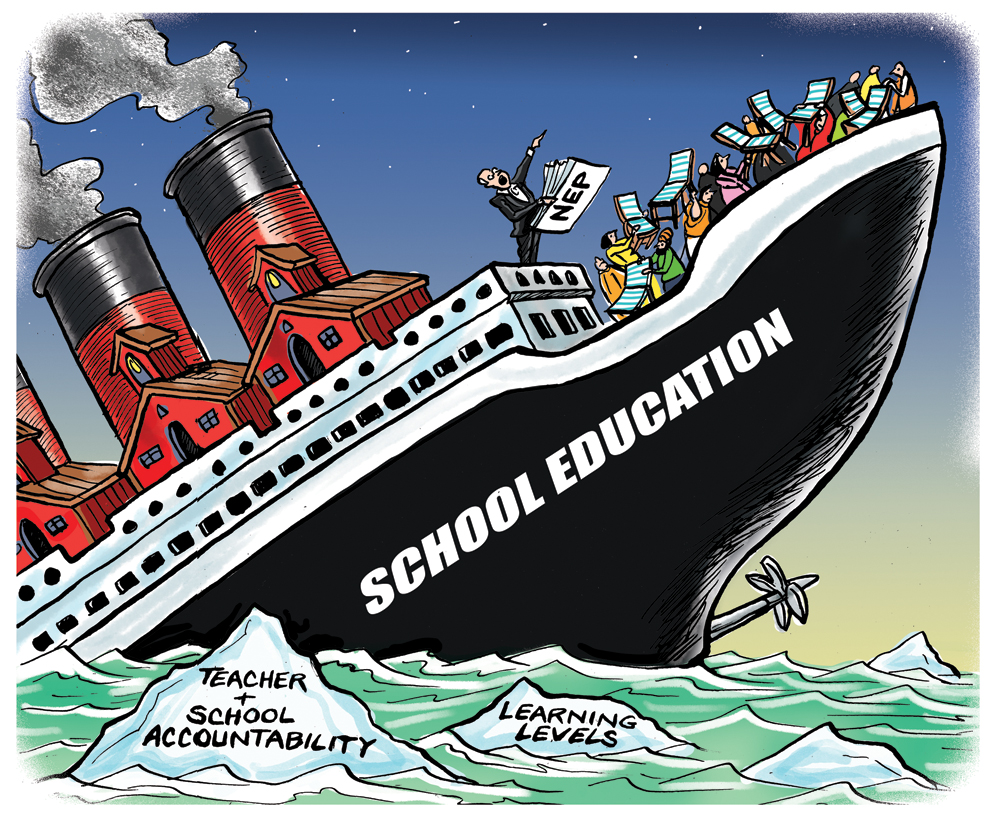 While the rest of the world has been dabbling with sweeping reform ideas such as school vouchers (a form of direct benefit transfer, DBT), the draft NEP does not even consider this, even though it could usefully be the central plank of reform to enable accountability.

This is unfortunate since the BJP government has boldly used DBTs to great benefit in many spheres (farmer subsidies, Ujjwala LPG gas subsidy, etc), giving the benefit directly to the citizen-voter, who is happy to receive the spending power palpably in her hand. Doing this also led to the removal of 80 million fake beneficiaries from the records, with savings of Rs 1.1 lakh crore on account of DBT. One could say this was an important secret of the popularity of Prime Minister Narendra Modi – his courage to countenance bold imaginative reform and implement it rigorously.

The same danger for theft exists when giving public money to private schools in reimbursement for educating disadvantaged children under the RTE Act. In 2017, it was reported that Madhya Pradesh private schools – with the connivance of education officials – siphoned off Rs 600 crore in RTE reimbursement fraud.

A revised NEP can seriously consider giving public subsidy for the education of disadvantaged children as DBT (giving the parent freedom to choose a school), rather than giving that money to private schools via leaky government structures. More generally, DBT could be used as the mode for giving all public subsidy to education, with crores of parents empowered to hold schools accountable when they have purchasing power in their hands. The central government already does this when it gives all central government employees a DBT (scholarship) of Rs 2,250 per month per child for education.

One high stakes policy prescription of the draft NEP that requires particularly close scrutiny is its advice to double public education expenditure to 20% of the total government budget. This is a demanding ask, and is not justified under current circumstances of massive wastage in school education.

While the NEP recognises the problem of unviably small public schools (Chapter 7 casually shares that 28% of all public primary schools in the country have less than 30 students), it does not diagnostically probe the extent of the emptying-out of public schools which have rendered them both pedagogically and economically unviable, as a precursor to policy prescription.

My analysis of raw official DISE data shows that between 2010-11 and 2017-18, enrolment in public elementary schools sadly fell by 2.4 crore students, while rising in the recognised private unaided schools by 2.1 crore students (the rest presumably going to unrecognised private schools that are not included in DISE); the reduction in public school enrolment was not due to any reduction in the elementary age child population since that population rose by 4.3% over part of the period (2009 to 2014) as per the IMRB surveys commissioned by the MHRD.

By 2017-18, just over 41% public elementary schools in 20 major states had a total enrolment of ‘50 or fewer’ pupils, an average enrolment of 27.9 pupils per school, and a lavish pupil teacher ratio of 12, signifying an acute teacher surplus. On these 41% of all public schools, in 2017-18, the public exchequer spent Rs 51,917 per pupil on teacher salary alone, which was equivalent to 45% of the per capita income of India and 134% of the per capita income of Bihar that year – so huge is the expenditure on more than two-fifths of the public schools. The idea that education quality is poor due to a paucity of resources and a high pupil-teacher-ratio is a monumental misdiagnosis of the situation, and before asking for more resources it is imperative to improve the appalling inefficiency.

The draft NEP has ignored the root of the inefficiency afflicting public education, namely the lack of school and teacher accountability. It is the ignored elephant in the room. Till this elephant can be seen, and tamed via DBT funding of schools, the well-intentioned and laboriously crafted provisions of the NEP will come to naught.