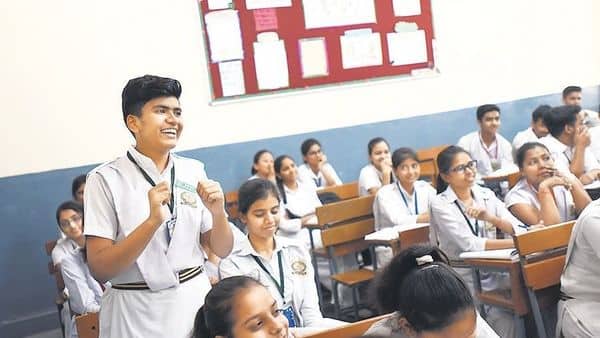 Good morning, how are you?” principal Tej Pal Singh asked a student. “I am fine sir. What about you?” They stopped to chat for a few minutes. It’s not something you see on the hierarchy-conscious campuses of our educational institutions, where it’s more likely a student will walk hurriedly by the principal, muttering good morning, her eyes fixed on the floor ahead of her. But at the Rajkiya Pratibha Vikas Vidyalaya (RPVV) in Dwarka’s Sector 10, students are encouraged to speak up, both in the classroom and outside. As the Aam Aadmi Party fights for a second term in the Delhi election, it’s worth revisiting the party’s impact on education through the story of this government school.

I witnessed this exchange in end-2018 when I was taken on a school tour by Singh, who helped me understand why the institution came out tops in an annual ranking for 2018-19. In September, it made it to the top of EducationWorld’s all-India rankings for the second consecutive year in 2019-20; once again it was named best government-run day school. Singh retired in 2019 after a nearly 10-year stint, but this RPVV—one of 22 such schools in Delhi—continues to shine.

When it won first place the previous year, the Education World magazine had said, “For the first time since 2014, a Kendriya Vidyalaya (KV) is not ranked No.1.” So how did this RPVV school—where the monthly income of 60% of parents is not more than ₹3,000—breast the tape ahead of the Centrally-funded KVs, or the “crown jewels” of public school education, as the magazine described them?

RPVV schools have a stellar record: It certainly helps that they admit top-performing children from government schools in classes VI, IX and XI and are considered the elite pack among Delhi’s 1,000-plus state-run schools. These are English-medium schools with manageable classrooms of 35 children and this particular RPVV school has performed well in the rankings for several years. Like all the other government schools in Delhi, they have benefited these past five years. AAP increased Delhi’s education budget by 106% to ₹9,836 crore in 2015-16 and education gets roughly a quarter of the Delhi government’s annual expenditure now. “In 2017-18, Delhi spent 23.8% of its budget on education. This is the highest in the country where an average expenditure by states is 14.8,” said Shailendra Sharma, principal adviser to the director of education, citing central bank statistics.

While the verdict is out on whether or not these schools are performing better on traditional quantitative indicators such as marks and dropout/enrolment rates, nobody will dispute the fact that AAP has changed the way we view education.

Infrastructure is the most visible change: RPVV schools were always better off than the rest but even these have seen significant changes in the last few years, starting with infrastructure, Singh told me then. “Whatever we ask for, we get,” he said. “We have a well-stocked library, laboratories, grass-cutting machines, a budget for civil work, a multi-purpose air-conditioned hall and even a ₹2.5 crore running track I didn’t request,” he said. Singh proudly showed me the washable 200m synthetic turf track that had been installed a few years earlier as part of the Delhi government’s effort to encourage sports in schools. In its 2018-19 budget, the government allotted ₹20 crore to promote sports and an additional ₹10 crore to train girls in self-defence.

They pay attention to detail: Prince Kumar said that for him, it was the small things that made a difference. The son of a DTC bus driver who topped the science stream in the CBSE XII class exam with 97% in 2018, he listed some of the factors that made him study better: “The toilets at school were very clean; the midday meal was served at the proper time and hygienically by servers with covered hair and gloves; students ate at tables and not on the floor; teachers came to class on time; and every teacher had a tablet so there was not much paperwork that wasted time,” he recalled of his two years at the RPVV in Dwarka.

They monitor progress closely: The school makes it their business to know everything about its students. They track how attendance is related to academic performance. Overall, they have a low absenteeism rate at 5-8%. If a student doesn’t come to school on time frequently, teachers investigate what’s going on. If they find it’s because of some discord at home, the student gets prompt counselling support. “There’s a robust monitoring system that looks at everything from health to performance,” Singh told me.

The school measures the body mass index of its students and tweaks their exercise regime and midday meals based on the results of these health surveys. Their strategy for dealing with difficult students is to make them take responsibility for themselves. “You decide, you introspect and choose, we won’t tell you what to do,” was one teacher’s response to a student who didn’t want to appear for an examination. The school even conducts a socio-economic survey of its students to understand them better. The survey has found that the monthly income of 60% of their students’ parents is not more than ₹3,000. Most of their students are first-generation learners from marginalized families.

Everyone is focused on “learning”: Like many of the Delhi government’s better-run schools, the teachers work hard to bridge the gaps in the education system, where rote learning has always been the preferred method of teaching (“We believe in facilitating self-learning rather than spoon-feeding,” one told me). Singh said then that the school had access to the education minister and academic autonomy. They were encouraged to develop their own syllabus. Teacher shortage—a problem at many schools—was not an issue here. Teachers understand that being knowledgeable is not the same as being able to communicate that knowledge effectively and they work hard on their methodology of teaching.

“We are very connected with all stakeholders—staff, children, parents, community,” biology teacher Anita Singh told me then. “That ‘it’s my school’ feeling of ownership is great.” Now that other schools have the magic formula, maybe the competition will be fiercer next year.

These CXOs wanna go back to school again