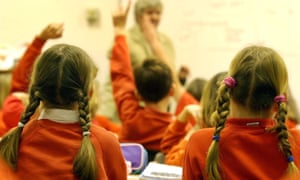 The number of small schools in England has halved in recent decades, with those in rural and village settings twice as likely to have shut their doors as those in urban areas, according to research.

The study says primary schools have undergone a dramatic transformation, with children increasingly being taught in “super-jumbo” institutions in towns and cities, many with more than 800 pupils, leaving villages to mourn the loss of a vital community asset.

According to data from the House of Commons library, there were almost 11,500 small primary schools in England with 200 or fewer pupils in 1980, but by 2018 the number plummeted to fewer than 5,500.

The same trend is echoed in Scotland and Wales. In 1985, there were more than 1,300 small primary schools with 200 or fewer pupils in Wales, but by 2017 the number had declined to fewer than 650. In Scotland, the number of small schools decreased by almost a fifth between 2002 and 2018, while the number of large schools with more than 400 pupils have tripled since 2002.

The largest proportional declines in the number of small schools were in Wales, the north-west, and Yorkshire and the Humber, while the smallest declines have been in the the south-west, east Midlands and London, according to the study by the Conservative thinktank Onward.

“With no discussion or public debate, a dramatic transformation has come over our schools in recent decades,” said the Tory MP and author of the report, Neil O’Brien. “Small schools and village schools have been in dramatic decline, and more and more small children are attending really huge schools.

“Many people will feel uneasy about these trends towards large-scale institutions for very young children, because they regard small schools as a more human scale for the very young. Others will be concerned about the effect on community life or on commuting times and congestion.

“Village schools are often much-loved institutions, at the heart of their community, places where the community gathers for special occasions, where people meet new friends, and community life gets organised. A village loses a lot when it loses its school.”

Funding is the key issue facing small schools, with fewer pupils meaning less income. O’Brien said the government’s new national funding formula was an improvement, but complained that a lump sum aimed at protecting small schools had been cut. “The next PM must reverse this and back our small schools,” he added.

A Department for Education spokesperson responded: “We recognise the importance of rural schools, the role they play in their communities and the circumstances they face. That is why the national funding formula allocates additional funding of £25m specifically for small and remote schools.”