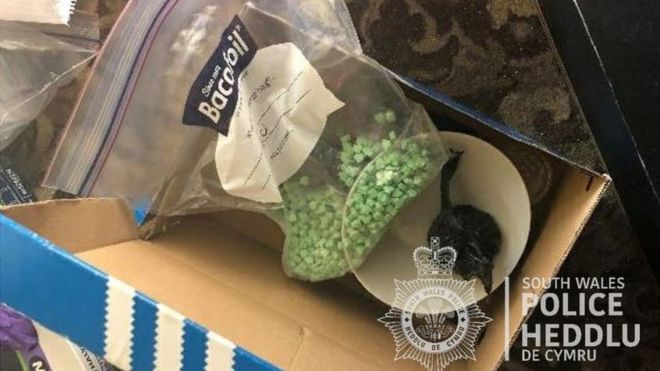 A drug dealer sold eight “Donkey Kong” ecstasy tablets to a “vulnerable” 16-year-old girl, who was hospitalised after taking them, a court heard.

Michael Iannucci, 20, was sentenced to five years and four months in a young offenders institution for selling drugs “far and wide on a commercial basis”.

Police raided his home in Phyllis Street, Barry, and found 1,403 ecstasy tablets with a street value of £14,000.

He admitted possession with intent to supply MDMA at an earlier hearing.

He also pleaded guilty to possessing Class A drugs, the acquisition, use and possession of criminal property (a stun gun), possession with intent to supply MDMA and criminal damage in a pub in Barry, Vale of Glamorgan.

Cardiff Crown Court heard the girl was hospitalised after taking eight of the tablets in woodland.

Her phone was receiving texts offering “Donkey Kong” and “Versace” tablets for £5. One text said “deals active most days” and another said “the last four days of this deal, so take advantage”.

The police searched Iannucci’s home and found evidence of a “sophisticated, thriving drug dealing business”, suggesting he had been involved in it for “some time”, the court was told.

The offending took place between October 2018 and April 2019.

Prosecutors said the case had “nothing to do” with other recent investigations, where risks of so-called “Donkey Kong” pills have been publicised.

The drug formed a line of inquiry for police investigating the death of 13-year-old Carson Price, who was found unconscious in an Ystrad Mynach park in April.

Iannucci had already been arrested on a separate occasion at a pub in Barry after he was found with a stun gun disguised as a torch, and a small amount of cocaine said to be for personal use.

The court heard the stun gun was designed to discharge a high voltage into a person.

Iannucci told police he found the weapon “in a pouch outside Asada”, but CCTV shown to the court revealed he was given the weapon by someone else in an effort to try and hide it from the police.

Speaking after the court case, Det Insp Sarah Trigg described Ianucci as a “multi-commodity drug dealer” who was targeting children in the Barry area.

“Thankfully, the teenager who was hospitalised from taking drugs supplied by the defendant has made a full recovery.”

Karan Johar on drug party accusation: ‘Vicky Kaushal was recovering from dengue, my mother was sitting with us’