Ohio, Maryland, Michigan and the large urban school districts of Seattle and San Francisco are shutting down all K-12 schools as part of a sweeping attempt to contain the spread of the coronavirus.

The actions are the first wave of widespread school closures in the U.S., and they stand to upend school and family routines for millions of children.

Such closures will also throw into sharp relief the deep socioeconomic divides in American education. Disadvantaged families who rely the most on schools for stable services, such as meals and access to learning materials, will be some of the most negatively affected.

“Wide-scale learning loss could be among the biggest impacts coronavirus has on children in America,” said Betsy Zorio, vice president of U.S. programs at Save the Children, an international children’s charity. “With an unprecedented number of school closures already announced and many more expected, ensuring that children can continue to learn is essential.”

Ohio Gov. Mike DeWine announced Thursday that all K-12 public, charter and private schools in Ohio will be shut down for three weeks starting Monday to try to contain the spread of the virus.

Those announcements came on the heels of Seattle Public Schools becoming the first major metropolitan school district to cancel classes to contain the spread of the virus. The district, which serves about 54,000 students, announced Wednesday it would be closed for at least two weeks.

In addition, Washington Gov. Jay Inslee ordered all K-12 schools in three of the state’s counties worst hit by the virus — King, Pierce and Snohomish — to close from at least March 17 to April 3.

On Thursday evening, California’s San Francisco Unified School District followed suit, saying it would close from March 16 through the end of spring break on April 3. 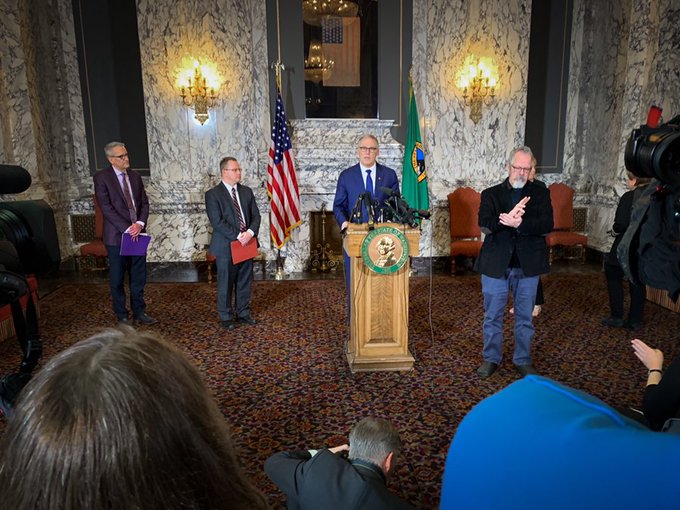 DeWine said the goal of the closures in Ohio is to slow the spread of the disease so that hospitals don’t become overwhelmed. The virus has not sickened children as readily as older adults, but there is some concern that children could transmit the virus even if they have mild symptoms or no symptoms.

DeWine said he knows the closures will be unwelcome and disruptive news for parents statewide.

“We have compassion for that,” DeWine said. “But we have a responsibility to save lives.”

So far, more than 10,000 schools across the country have closed or are planning to close because of the virus, affecting about 4.9 million children, according to the latest count by Education Week magazine.

Confirmed cases of the infection in the U.S. rose past 1,500 Thursday. No children in the U.S. have died from the virus.

Are kids at risk for coronavirus? WHO report says no, but some doctors aren’t so sure

The federal Centers for Disease Control and Prevention has advised schools that if an infection is detected in the community, school leaders should consult with their local health departments about when to close.

But as the virus has spread this week, school and political leaders have taken more aggressive actions. Kentucky Governor Andy Beshear on Thursday recommended but did not mandate public and private schools close for two weeks starting Monday.

School districts facing an imminent shut down will have to figure out whether they will continue meal service for low-income families, whether they’ll offer any sort of online instruction, and whether they’ll have to change or cancel federally mandated state exams, which are often administered in spring.

“Over 20 million kids in the U.S. are eligible for free and reduced-price lunches, and school closures run the risk of depriving kids access to that,” said Aaron Pallas, professor of sociology and education at Teachers College in New York City.

The federal government has said that schools can deliver meals in the community during the health crisis similar to how many districts distribute them in summer. But that they do not have to be handed out at a group site, officials said, as doing so would fly in the face of health experts’ recommendations for “social distancing.”

The Department of Education on Thursday announced it would offer allow states to apply for a one-year waiver from administering state exams in the event a prolonged closure interfered with their testing windows.

How to talk to kids about coronavirus:Stay honest and simple to avoid anxiety

Meanwhile, millions of families will have to figure out how to alter child care and work routines.

“It’s especially hard for families of working parents who don’t have jobs that provide the capacity to work remotely,” Pallas added. “Young kids do need supervision, and we don’t have a great backup system for the schools and for childcare.”

Some individual schools and small districts have mobilized quickly to make a plan for delivering instruction online during a shut down. But many larger districts, as well as those with many parents lacking access to technology, do not have the same capacity to do that.

Seattle school officials told parents to plan as if they were entering an extended spring break.

After the closure announcements Thursday, many parents complained on social media, saying that shuttering schools would put additional pressures on parents, including putting some people’s jobs at risk.

Pallas said he could understand how the extraordinary circumstances prompted such decisions.

“If kids learn anything during these breaks, it will be surprising,” he said.