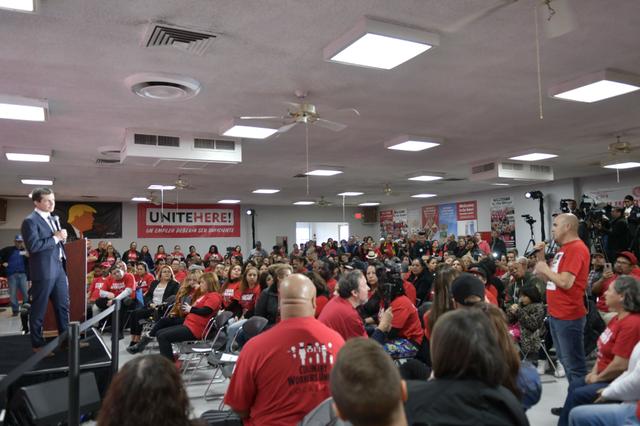 The very progressive culinary workers union in Nevada failed to endorse its logical choice, Bernie Sanders. Why? Because the union wants a special exemption from Sanders’s proposed Medicare for All, so that its members can continue coverage under its superb collectively-bargained health plan.

The union is right to defend its plan.

The locals of the hotel and restaurant workers union (Unite HERE) in cities where the union has real power—most notably New York and Las Vegas—have exemplary health plans that could teach the rest of the world something about good health policy. In Nevada, where the union has organized most of the Las Vegas hotels and casinos, the plan covers nearly 140,000 workers and their family members. All fulltime workers (who work at least 240 hours every two months) get premium-free coverage.

That’s a large enough pool to enable the plan to write its own rules. For starters, they don’t use insurance companies; they have their own clinics, open 24 hours a day; and their doctors are mostly salaried.

They encourage members to come in as often as then want. There are no deductibles, and co-pays in most circumstances tend to be modest. For instance, the total co-pay for giving birth including pre-natal care is $320.

The plan covers dental care, eye care, and prescription drugs. There is no profit motive, thus no manipulation of profit-centers, and no middlemen inflating costs.

Because union members are typically plan member there for a long time, doctors and other professionals really get to know their patients. Wellness is emphasized.

Thanks to these efficiencies, the plan provides fine care at much lower cost to members than its commercial competitors. And it covers a lot more than standard Medicare.

When I did a long feature on New York’s Local 6 of the hotel and restaurant union, which runs four direct care clinics in three of New York’s boroughs, I found that the union plan costs about one-third as much as the next cheapest one and provides a lot more care.

Because of the size and power of the union plan, it is also able to bargain for the best possible rates (this is a union after all) when it has to go outside its own salaried employees for specialists. And unlike most health plans, it has direct contracts with hospitals.

The plan also uses specialists a lot less promiscuously than standard plans. Why? Because your typical hospital-owned medical practice has a financial incentive to inflate costs, in order to maximize insurance reimbursements. So your internist will likely send you to a specialist for a procedure that an internist could easily do. (Ever try to get your internist to remove a wart?) At culinary workers clinics, the internist does it.

With doctors salaried, there is neither a financial incentive to over-treat nor to under-treat. Patient data bases, which frustrate doctors elsewhere, are used to track clinical care, not to maximize insurance reimbursement (since there is no insurance company.) And the plan also saves a fortune on billing costs.

Where can I sign up for such a plan? You can’t unless you are a member of the culinary union.

In the old days, some non-profit prepaid group health plans ran more or less on this model, but most have converted to for-profits. The Mayo Clinic is probably the closest surviving equivalent. The VA, as a closed system with salaried doctors, also has some of the same features.

The union plan is not perfect. For instance, with the right combination of complex medical conditions and bad luck, in rare circumstances total out of pocket charges could add up to as much as $12,700 a year for a family. But that’s well below the Affordable Care Act ceiling, which is $16,300, on top of premiums.

Most unions are not as powerful as the culinary locals, and most Americans will never get this kind of care through unions at all. But that’s all the more reason to defend islands of great union achievement—and to get universal coverage for other Americans.

Thus the culinary workers plan presents a couple of kinds of challenges for Medicare For All advocates, as well as for the Sanders and Warren campaigns.

For starters, the whole argument about “single payer” insurance, of which Medicare is the emblematic case, fails to address the issue of the hyper-commercialization of American medicine, which is at least as much an evil as the fragmented nature of insurance coverage.

The current Medicare system, despite being a single payer plan, manages to get bilked by hospitals and physician practices using profit-maximizing strategies.

Its effort to limit these abuses only invites even more baroque industry strategies, in an endless game of Spy versus Spy.

Indirectly, Medicare makes parasitic middlemen rich. The risk, as we try to enact Medicare for All, is that we may not have the votes to eliminate of all of its unsavory features. And of course, the taxpayer ultimately pays.

Shift to Medicare for All without getting rid of the other parasites in the system and you’ve only solved part of the problem. Costs will continue to inflate. The existence of “Medicare Advantage” plans, which are private plans financed by Medicare and branded as Medicare (and which use all the tricks of private insurance) only compounds the problem.

The debate over whether working Americans need Medicare For All or union-negotiated health benefits is a false choice. While some working people have good health care plans through their jobs, many do not. Access to quality health care shouldn’t be based on luck, it should be a right.

Amen to that. Coming up with a wraparound for high quality union plans in the context of the move to Medicare for All is not rocket science.

Three homework assignments for advocates of Medicare For All:

First, give the first-rate collectively bargained plans the exemption they are demanding. Their plans in many respects are better than the current version of Medicare, and is a model for it.

Second, come up with a serious strategy for de-commercializing American medicine, not just changing who pays for it. This will marry sound health policy to sound fiscal policy to sound politics.

Third, hire the architects of the culinary workers plan as your health policy advisers.

There could be a link between marijuana use and heart health